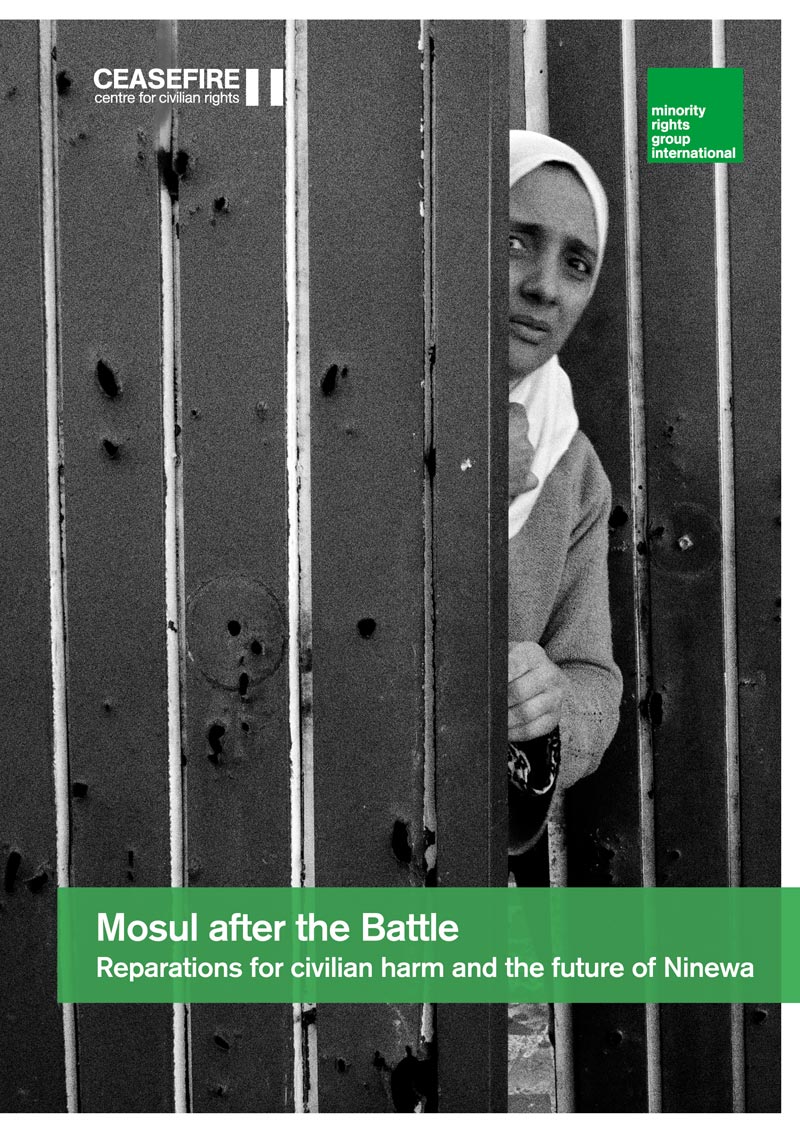 Read the report here: Mosul after the Battle: Reparations for civilian harm and the future of Ninewa

‘The Iraqi government is now being asked to pay compensation to the victims of international coalition bombing, while the coalition itself washes its hands,’ says Mark Lattimer, Director of the Ceasefire Centre for Civilian Rights. ‘The US, the UK and other members of the coalition should meet their responsibilities towards victims or risk creating a legacy of anger and resentment in Mosul.’

While all parties to the conflict are required under international law to pay reparations for violations against civilians, so far this responsibility has been assumed almost exclusively by the Government of Iraq. Iraq’s Law 20 on ‘Compensating the Victims of Military Operations, Military Mistakes and Terrorist Actions’ provides civilians with an avenue to access desperately-needed monetary compensation for personal or property damage suffered as a result of the fighting in Mosul and elsewhere. 35,000 applications from residents of Mosul and the wider governorate of Ninewa who suffered under the ISIS occupation or the military campaign to retake the city have been processed from mid-2017 until November 2019. 5,850 of the claims relate to martyrdom (deaths), and 2,700 relate to physical injuries leading to disability. Some 24,000 claims for property damage have also been sent to Baghdad for approval. The total sum of compensation awarded is expected to exceed US $ 100 million.

However, pay-outs are slow in coming and the procedure to file a claim under Law 20 is cumbersome, lengthy, and marred by allegations of corruption, leaving many civilians frustrated and hopeless, the report finds. Moreover, the mechanism fails to acknowledge the full responsibility of the US-led coalition to provide reparations to civilians in cases of wrongful conduct by coalition members.

The law also falls short of recognizing the systematic and targeted nature of the crimes perpetrated against Iraqi minority communities. For example, it is completely silent on sexual violence and child conscription, which were both used as part of ISIS’ genocidal campaign against the Yazidi minority. An estimated 3,000 Yazidis remain missing up to this day.

‘Reparations are about more than just giving civilians a means to rebuild their homes or access medical treatment – they are about acknowledging harm and restoring dignity,’ says Miriam Puttick, Civilian Rights Officer at Minority Rights Group International. ‘This is particularly important for members of minorities, whose very sense of identity and belonging were attacked in the recent conflict.’

The report recommends strengthening the mechanism to ‘Compensate Victims of Military Operations, Military Mistakes and Terrorist Actions’ under Law 20, through easier evidentiary conditions for compensation. New legislation recognising war crimes, genocide and crimes against humanity should also be drawn up under Iraqi criminal law.

The report also recommends the creation of a comprehensive reparations programme or fund addressing the harm inflicted by international coalition action within the anti-ISIS campaign.

‘Mosul was the epicentre of the battle against ISIS and will set the standard for transitional justice in Iraq’ says Lattimer. ‘How Iraqi authorities and the US-led coalition handle reparations in Mosul is a test case for Iraq’s future.’

Mosul after the Battle is published by the Ceasefire Centre for Civilian Rights and Minority Rights Group International on 22 January 2020. This report was written on the basis of in-depth interviews conducted in Iraq between November and December 2019. For a wider analysis of reparations in Iraq, please see our report Reparations for the Victims of Conflict in Iraq (2017), available at: https://www.ceasefire.org/wp-content/uploads/2017/11/Reparations-in-Iraq-Ceasefire-November-2017.pdf

For the Arabic version of this report, please click here.