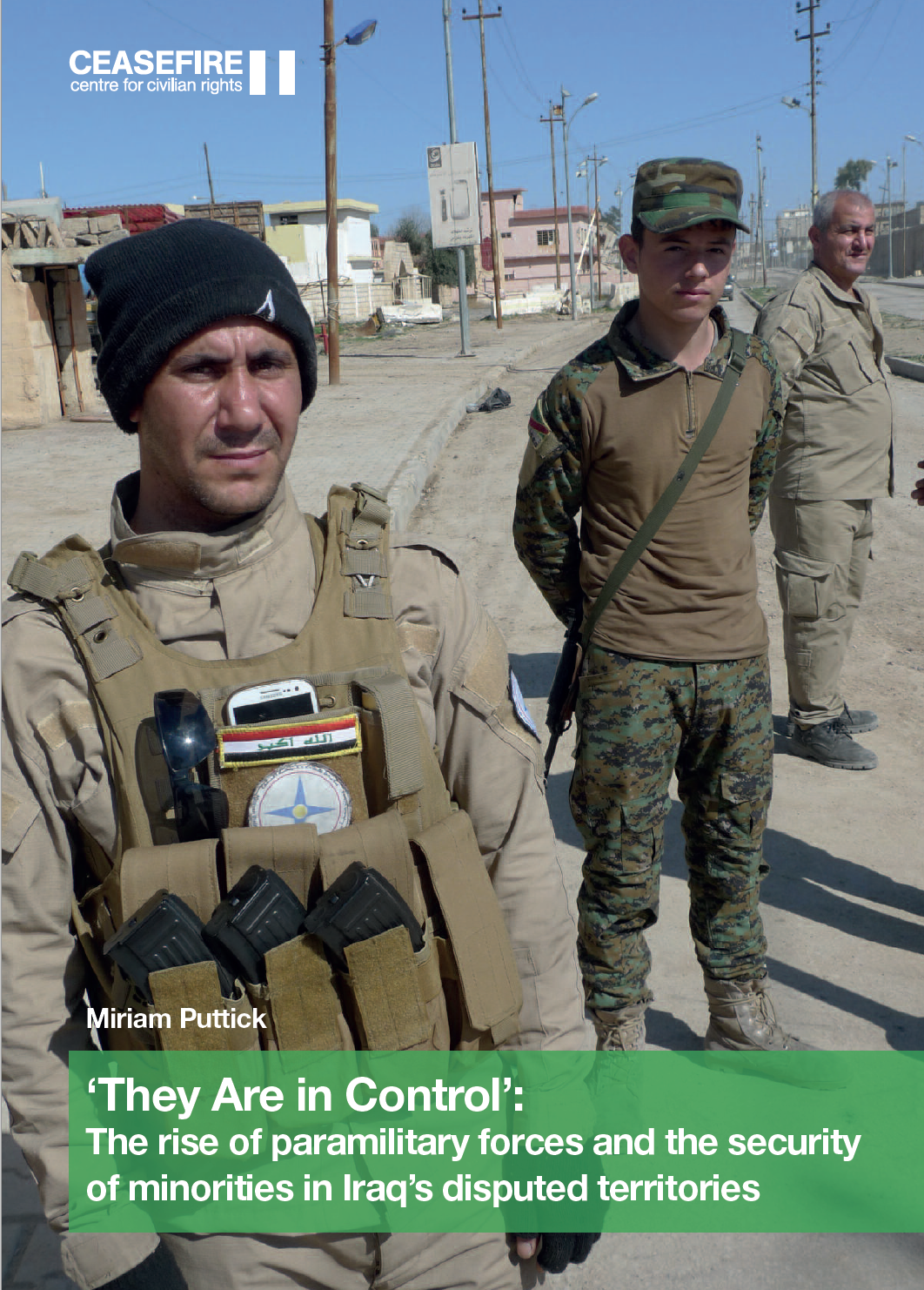 In Iraq’s disputed territories, government-funded militias are having a destructive impact on governance, economic life, and community relations, according to a report released today by the Ceasefire Centre for Civilian Rights. The dominance of these militias is acting as a major barrier to the return of civilians displaced by the conflict with ISIS, especially members of minorities.

The report, entitled ‘They Are in Control’: The rise of paramilitary forces and the security of minorities in Iraq’s disputed territories investigates the newly empowered role of the Popular Mobilization Forces (PMF) in Iraq’s ethnically and religiously diverse disputed territories. The report looks at the situation in the Ninewa plain, Tal Afar, Sinjar and Kirkuk since the end of the conflict with ISIS.

The PMF is an umbrella of armed factions which was formed to fight against ISIS from 2014-2017. Today, the PMF enjoys official recognition and state funding, receiving an annual budget of $2.6 billion from the Iraqi government.

In the country’s northern disputed territories, the site of a decades-long power struggle between Baghdad and Erbil, factions affiliated with the PMF were handed responsibility over key security functions in territories they helped to retake from ISIS control. But since then, PMF factions have overstepped their authority in the security domain to become powerful actors in social, economic and political life.

‘The PMF receives state funding, but is completely unaccountable to any civilian authority,’ says Miriam Puttick, Head of Middle East and North Africa Programmes at Ceasefire and the author of the report. ‘This becomes even more of a problem when they control access to resources and services that ordinary Iraqis need to survive.’

In Bartella, a town in the Ninewa Plain with a mixed Christian and Shabak population, locals accuse the PMF factions of interfering in state appointments and decisions, manipulating housing titles and real estate transactions, and influencing police investigations. While the PMF’s dominance has brought benefits for marginalized Shabak fighters who joined its ranks, the corrupt influence of the PMF on local affairs has deterred many Christian residents of the town from returning home.

Sinjar, site of the genocide against Iraq’s Yazidis in 2014, is another clear case where the presence of armed groups has deterred civilians from returning. Almost eight years after the start of the conflict, most of the population of the district remains displaced, despite the military defeat of ISIS. PMF factions have obstructed political normalization in the district and escalated confrontations with local and regional military actors, leaving many civilians afraid that fighting could easily break out again.

While the formation of minority militias is sometimes seen as a positive step for community self-defence, the report finds that civilians would overwhelmingly prefer to see the factions incorporated under a unified national force– a promise that has been repeated by successive governments in Baghdad.

‘The new Iraqi government should take real steps to bring the PMF under effective control of the government before it becomes too late,’ says Puttick. ‘The factions are amassing increasing economic and political capital that will only make them harder to control in the future.’