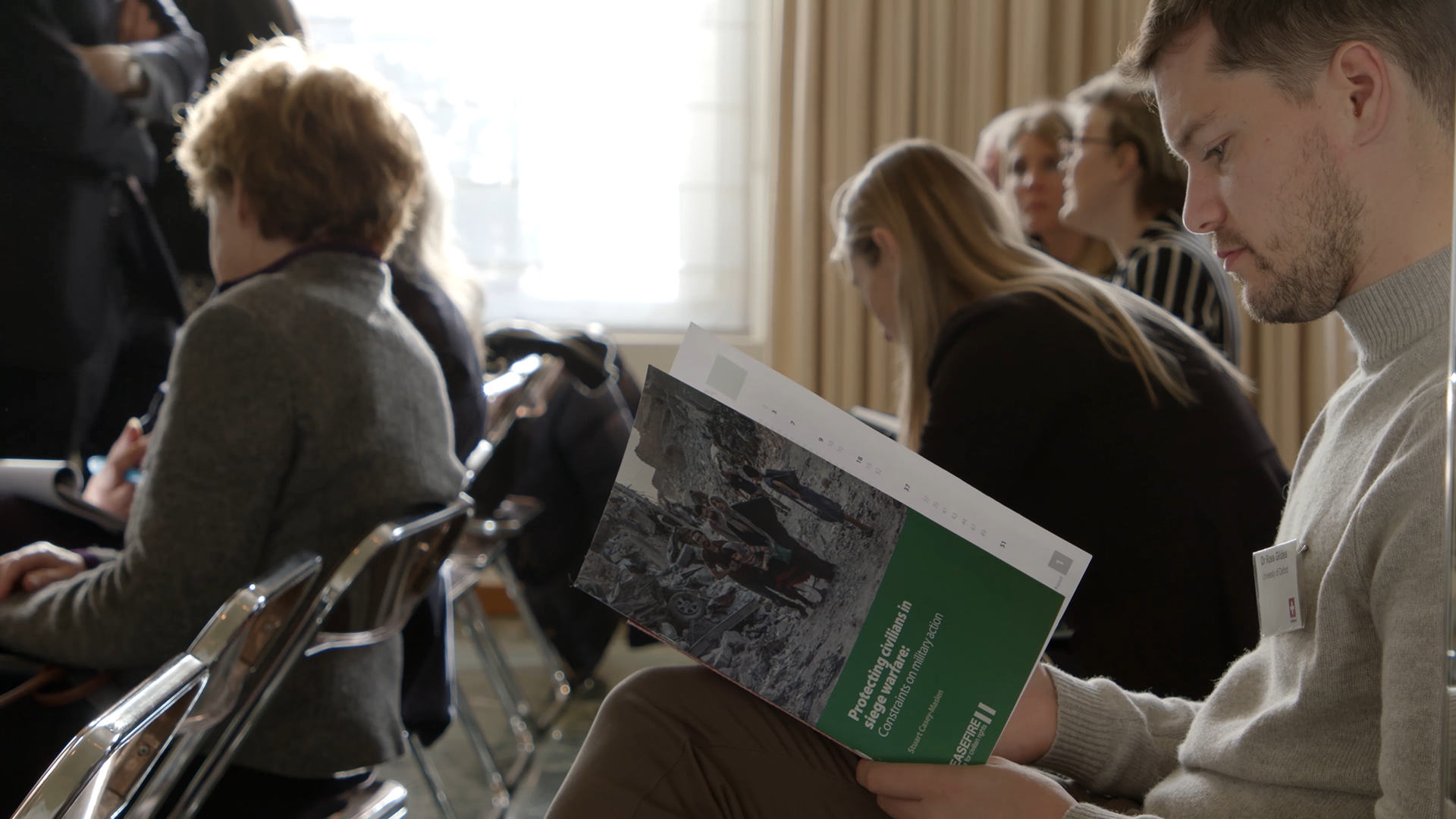 From Mariupol and other cities in Ukraine, to Mosul, Aleppo and other cities in Iraq, Syria, Yemen, Ethiopia and the Philippines, the global resurgence of siege warfare and its devastating impact on civilian populations have raised serious questions about the implementation of international humanitarian law (IHL) and military strategy and operational practice.

Such questions were considered at an event at the Swiss Ambassador’s residence in London on 31st March to launch CEASEFIRE’s latest report, Protecting civilians in siege warfare: Constraints on military action. Academics, lawyers, civil servants, parliamentarians, military officials and civil society members gathered to engage with a panel discussion on the protection of civilians and siege warfare.

The Swiss Ambassador Markus Leitner introduced the panel discussion, referring to Switzerland’s long-standing tradition of protecting civilians in armed conflict and emphasising the importance of the conversation. He underlined the priority of the protection of civilians in Swiss foreign policy and the value of cooperation with like-minded countries such as the UK. Opening remarks were also given by Ambassador Corinne Cicéron Bühler, Director of the Directorate of International Law at the Swiss Federal Department of Foreign Affairs, on the role of IHL in regulating siege warfare, and how Switzerland is working in multilateral forums to strengthen IHL and compliance with it.

The panel discussion, which was conducted under the Chatham House Rule, was chaired by CEASEFIRE’s Executive Director, Mark Lattimer, and the speakers included:

Participants agreed that while siege warfare is often referred to as ‘medieval’, this description was deeply inaccurate given how widespread such tactics are in contemporary urban warfare, and the extent to which modern technologies and equipment have changed the nature of siege warfare.

Several panellists and audience members spoke about the devastating consequences of siege warfare for civilian populations, including casualties from bombardment, food and water scarcity, and psychological consequences. It was crucial that discussions were grounded in the realities of civilians’ lives under siege.

A significant point of discussion was about whether existing IHL was sufficient for mitigating civilian harm from siege warfare, and if so, whether the focus should be on increasing compliance with IHL. Some commented that it was better to improve compliance with IHL in siege warfare through increased training, funding, and accountability for potential violations. Others noted that these approaches were not mutually exclusive, and that we should seek to expand IHL where necessary while also strengthening compliance to existing IHL.

There was also an ongoing conversation about what accountability means in the context of siege tactics and urban warfare. Participants examined criminal and state accountability for violations of IHL during sieges, and what avenue may be most appropriate for this kind of warfare.

ceasefireThe protection of civilians and siege warfare: CEASEFIRE and the Embassy of Switzerland in the UK host event05.03.2022