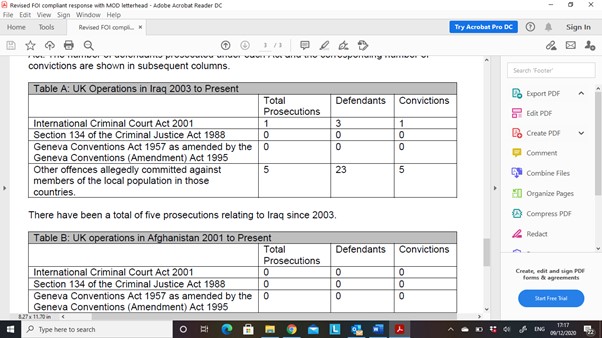 Official figures released by the Ministry of Defence to Ceasefire Centre for Civilian Rights reveal that since 2001 there has only been one prosecution of UK armed forces personnel for war crimes overseas.

Despite lengthy engagements in Afghanistan and Iraq, and evidence of serious abuses by UK service personnel against local civilians, data supplied to Ceasefire under the Freedom of Information Act show that only one war crimes prosecution has been conducted, in over nearly two decades, under the International Criminal Court Act 2001, which brought within UK law those offences of genocide, war crimes and crimes against humanity within the jurisdiction of the ICC. No prosecutions against UK personnel were brought under either the Geneva Conventions Act 1957, which first criminalized war crimes in UK law, or under Section 134 of the Criminal Justice Act 1988, which criminalizes torture.

‘These figures contradict the argument by defence ministers that the Overseas Operations Bill, currently going through Parliament, is required to put an end to “vexatious prosecutions” for war crimes,’ said Rose Burke, Policy Officer at Ceasefire Centre for Civilian Rights. ‘In reality, there have been none. There should no longer be any doubt that war crimes and torture, along with sexual crimes, should now be exempted from the Bill’s “triple lock” on prosecutions after five years.’

The sole war crimes prosecution relates to the killing of Mr Baha Mousa, an Iraqi civilian from Basra, which later formed the subject of a judicial inquiry. Three members of the Queen’s Lancashire Regiment were charged, and one convicted in 2007, of inhumane treatment as a war crime under the International Criminal Court Act 2001. An autopsy on Mr Mousa’s body recorded 93 separate injuries.

In relation to military operations in Iraq:

In relation to military operations in Afghanistan:

It emerged in June that the Service Prosecuting Authority had closed all but one of the remaining legacy investigations from Iraq and that any further prosecutions were now unlikely.

The sole prosecution and conviction for a war crime committed in UK overseas military operations demonstrates that the Overseas Operations Bill, which includes a ‘presumption against prosecution’ after five years for alleged war crimes committed by British troops abroad, is fundamentally misguided.

Although there have been few prosecutions, the MoD has approved payments totalling £20 million to settle over 300 cases of alleged violations committed by UK service personnel in Iraq alone, including in relation to conduct which falls within the definition of war crimes. The Overseas Operations Bill introduces an absolute long-stop of six years on claims against the MoD from either service personnel or civilians who have suffered harm.

‘With the release of these figures, the real purpose of the Overseas Operations Bill has now become obvious. It is not to protect UK armed forces from prosecution, but to shield the government from liability,’ said Mark Lattimer, Ceasefire’s Director. ‘It should be renamed the MoD protection bill.’

The new data form a more comprehensive account than the one given to the Parliamentary Joint Committee on Human Rights on 5 October by Damian Parmenter, Director of Defence and Security Industrial Strategy at the MoD, and follow a review of the historic prosecutions before the establishment of the Service Prosecuting Authority in 2009. Ceasefire wrote last week to the Prosecutor at the International Criminal Court to provide her with the latest figures.

This information comes as the Prosecutor at the International Criminal Court has announced the closure of her preliminary examination of the UK’s record in Iraq. The Prosecutor found that there was a reasonable basis to believe that UK servicemen committed war crimes including wilful killing/murder, torture and inhuman/cruel treatment, but declined to pursue a full investigation because it was not shown that the UK had acted to shield perpetrators from justice.

SianOfficial figures reveal only one prosecution of UK armed forces personnel for war crimes overseas since 200112.09.2020