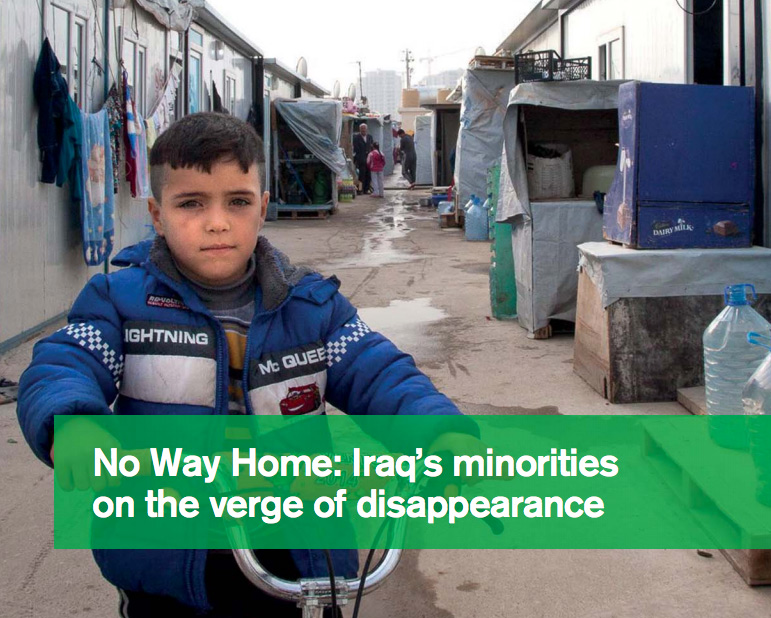 No Way Home: Iraq’s minorities on the verge of disappearance seeks to document the situation of Iraq’s ethnic and religious minorities most affected by the violence that escalated after the fall of Mosul in June 2014. It is published by the Ceasefire Centre for Civilian Rights, jointly with Minority Rights Group International, the International Institute for Law and Human Rights, No Peace Without Justice and the Unrepresented Nations and Peoples Organization (UNPO).

Since June 2014, many thousands of persons belonging to minorities have been murdered, maimed or abducted, including unknown numbers of women and girls forced into marriage or sexual enslavement. ISIS forces and commanders have committed war crimes, crimes against humanity and the crime of genocide, including summary executions, killing, mutilation, rape, sexual violence, torture, cruel treatment, the use and recruitment of children, outrages on personal dignity, and the use of chemical weapons.

Cultural and religious heritage dating back centuries continues to be destroyed, while property and possessions have been systematically looted. These abuses are ongoing at the time of writing and appear to be part of a conscious attempt to eradicate Iraq’s religious and ethnic diversity. It should also be stressed that as the latest phase in the conflict reaches a two-year benchmark, forces fighting ISIS have also apparently committed human rights and international humanitarian law violations, including Iraqi Security Forces, Popular Mobilization Units and Kurdish Peshmerga.

The millions of displaced still remain in camps, and there are no serious returns to areas retaken from ISIS. As of March 2016, internal displacement exceeded 3.3 million. Iraqi sources estimate the total number of those who have lost their homes and are internally displaced at more than 4 million, factoring in those IDPs not registered.

Currently, there appears to be no serious Iraqi or international effort to build the political, social and economic conditions for the sustainable return of those who lost homes and livelihoods as a result of the conflict. Militias and unscrupulous local authorities are exploiting this vacuum.

This report is called ‘No Way Home’ to highlight the despair Iraqi ethnic and religious communities feel about prospects for return. This perspective is rooted both in a sense of hopelessness about the prospect of return and frustration with the continued deterioration of humanitarian conditions. There is a lack of trust that the government, regional actors, local officials or the international community will provide the necessary support to facilitate returns, locate missing persons, provide justice, facilitate the difficult process of reconciliation and ensure the return of looted possessions and homes. The result will be another Iraqi lost generation, radicalized by homelessness and depredation, repeating the cycle

SianNo Way Home: Iraq’s minorities on the verge of disappearance05.01.2016