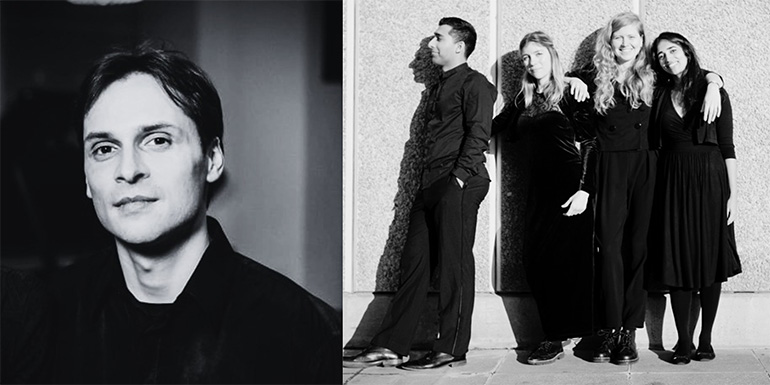 Ceasefire are set to host their first fundraising concert in support of their work to empower civilians caught in conflict zones, including Ukraine, and the Middle East and North Africa.

The concert will be held on Friday 4 November 7.30pm in the beautiful venue of St James Church in Islington, London. Internationally acclaimed Ukrainian concert pianist, Sasha Grynyuk, and the Morello Quartet, are set to perform a uniquely themed programme centering around several composers of significance in relation to the ongoing conflict in Ukraine. Find out the full programme here.

The Morello Quartet was formed by four good friends and graduates of The Royal Academy of Music in 2019 – Anna Caban (violin), Ana Popescu-Deutsch (violin), Kesari Pundarika (viola), and Anil Umer (cello). Their inaugural concert was part of St. James’ Concert series in Paddington in March the following year. Since then, they’ve performed as part of ‘Enescu and Friends’ concert series at the Romanian Cultural Institute in London, at the Shipwright Festival in Deptford, the Artisti con Brio series at the Candid Arts Trust and in many places around the UK. Recent engagements include a cross-sensory concert at the Tea House Theatre in Vauxhall where a three-course meal themed on the programme was served alongside the performance. The group is passionate about performing varied and diverse programmes combining classical, folk-inspired, and contemporary music. Listen to the quartet on their website here.

Tickets are available on the door or online. Prices are £20 General Admission, £10 for Under 25s/Unemployed and Free for Under 15s. Group discounts of 5+ are also available by emailing the Ceasefire Fundraising Team on fundraising@ceasefire.org

There will also be a raffle with many fantastic prizes up for grabs, a short talk by a member of our charity, and plenty of wine and nibbles to enjoy for a small donation. Raffle prizes include a Luxury Food Hamper and £50 voucher from The Cheese Geeks.

To find out the full event details, and buy tickets click here.

Can‘t make the concert but still want to support us? Visit our JustGiving Fundraising Concert Page by clicking here